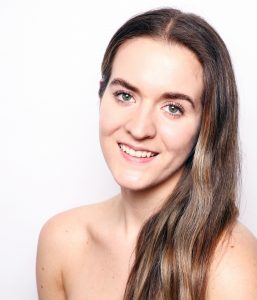 Haley Marcin is a creator, educator, and performing artist, who graduated summa cum laude from the University of North Carolina Greensboro with a BFA in Dance with a focus in choreography and performance. Haley has had the pleasure of performing works by Martha Graham, Bill T. Jones/Arnie Zane, Janet Lilly, B.J. Sullivan, Clarice Young, and several Chicago choreographers such as Hanna Bricston and Jessica Miller Tomlinson. Haley has trained and performed with companies in several cities including Chicago and New York. She has performed nationally and internationally and her choreography has been performed on several stages including Alto Monte, Italy. After training on full scholarship in Calabria, Italy, Haley apprenticed with the Michael Mao Dance Company in New York. Since moving back home to Chicago, Haley has danced with Aerial Dance Chicago and is currently dancing for Project Bound Dance and Still Inspired(?). When Haley is not taking class or rehearsing for a show, she loves creating her own works and teaching. Haley has been invited consecutively to teach at an Honor’s Ballet Summer Intensive at The Dance Company in Alabama. More recently, she was selected to be the master contemporary teacher at The Dance Center of Greensboro by the Southeast Committee Cecchetti Council of America. Haley was also asked to teach Release technique classes at FINI Dance Festival in Calabria, Italy. Haley’s drive, deep love for dance, and constant need to learn more has led her to many new places, opportunities, performances, and accomplishments that shape her and the performer she is today.

register
Thank you for contacting us!